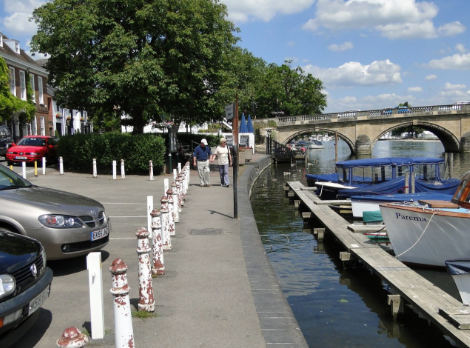 Henley-On-Thames  is a town and civil parish on the River Thames in Oxfordshire , England, 9 miles (14 km) northeast of Reading , 7 miles (11 km) west of  Maidenhead.

Henley-On-Thames is a Winner of a Britain-in-Bloom Gold medal. This 13th century market town is one of the most beautiful towns in England.  Henley enjoys a wonderful stretch of river with independent shops, numerous of brilliant pubs, cafes and restaurants.

The first record of Henley is from 1179. And now The River and Rowing Museum is located in Mill Meadows. It was established and officially opened by Queen Elizabeth II in 1998.

Henley is a world-renowned centre for rowing. Throughout the summer it hosts internationally renowned sporting events and festivals. Each summer the Henley Royal Regatta is held on Henley Reach. The event became “Royal” in 1851, when Prince Albert became patron of the regatta.

Thames Traditional Boat Festival first held nearly 40 years ago, it showcases trades and crafts of a bygone era, as well as providing a fun day out for all the family. Highlights include: Gloriana – Her Majesty’s Royal Rowbarge, “Little Ships” of Dunkirk, Amphibians, Battle of Britain Memorial, Classic & Vintage cars, motorcycles and bikes, Punch & Judy and others and even camping on site.

This website uses cookies to improve your experience while you navigate through the website. Out of these, the cookies that are categorized as necessary are stored on your browser as they are essential for the working of basic functionalities of the website. We also use third-party cookies that help us analyze and understand how you use this website. These cookies will be stored in your browser only with your consent. You also have the option to opt-out of these cookies. But opting out of some of these cookies may affect your browsing experience.
Necessary Always Enabled
Necessary cookies are absolutely essential for the website to function properly. This category only includes cookies that ensures basic functionalities and security features of the website. These cookies do not store any personal information.
Non-necessary
Any cookies that may not be particularly necessary for the website to function and is used specifically to collect user personal data via analytics, ads, other embedded contents are termed as non-necessary cookies. It is mandatory to procure user consent prior to running these cookies on your website.
SAVE & ACCEPT